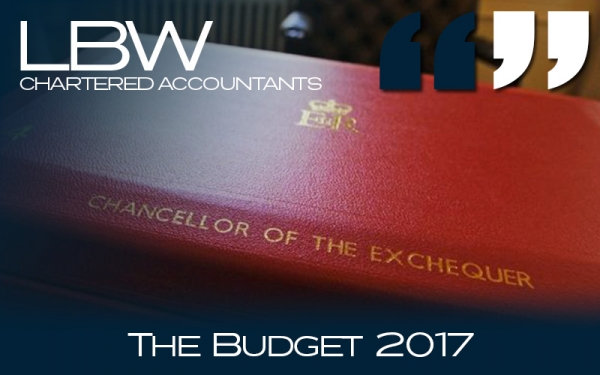 Philip Hammond today delivered his first (and last) Spring Budget as Chancellor of The Exchequer.

We are as usual detailing below some of the more salient taxation features which we believe will be of interest to you.

There are no planned changes to increasing personal allowances to £11,500 in 2017/2018 and they are on course to increase this allowance to £12,500 by 2020. Also the thresholds for increasing the starting point for higher rate tax will be as previously announced at £45,000 for 2017/2018 and £50,000 by 2020. The new National Living Wage for the over 25’s was confirmed to rise to £7.50 from April 2017. The Government recognise the inequities that arise from the differing rates of National Insurance for employed people compared with the self-employed who for largely the same state benefits can make substantially lower contributions. This differential will become more marked following the abolition of Class 2 National Insurance which had previously been announced and which would take effect from April 2018. As a consequence, the Chancellor will increase the rate of Class 4 National Insurance contributions from 9% to 10% with effect from April 2018 and then a further 1% increase in the following year. UPDATE! - The government have made a U-turn on this National Insurance proposed increase admitting that any increase would be contrary to the manifesto pledges.

The Taxation of Dividends

The Government also recognised that considerable savings can be made by operating business through a Limited Company. As part of the overall revamping of the taxation of dividend announced previously, a 0% tax band was introduced for the first £5,000 of dividend income. This still provided a benefit to operating as a Limited Company compared with operating as a sole trader. In an attempt to “level the playing field” the Chancellor has reduced the £5,000 tax band to £2,000 and thus an extra £3,000 of dividend income will now be subject to tax. This would cost a basic rate tax payer an additional £225 and a higher rate tax payer an additional £975.

The Government have confirmed that this WILL happen and is being introduced during the 2018/19 income tax year. This will be initially introduced for the self-employed and landlords and will eventually encompass VAT and Limited Companies. The Chancellor has however following representations made by interested parties, delayed the implementation of the scheme for those with turnover that falls below the VAT threshold for a further 12 months. Just to clarify, the turnover figure referred to will, for those who have both rental and self-employment, be a combination of both. The VAT registration limit will increase to £85,000 from April 2017.

Following the business rates revaluation in April 2017, a number of small businesses may see the loss of small business rate relief. Support will be given to these businesses whereby the increase in their rates bills will be capped at no more than £50 per month. A further business rate discount of £1,000 will be granted to public houses which have a rateable value of under £100,000. Finally, local authorities are being given a fund to provide discretionary relief to individual hardship cases within their local area. The full details of this have not yet been published.

The consultation period has now concluded and regulations and guidance notes issued for individuals working for public sector bodies (including bodies such as The BBC, The British Museum and Channel 4) through their own Limited Company. The public body concerned (or agency) will be responsible for deducting tax and National Insurance from the individual’s remuneration with effect from April 2017. Initial experience indicates that these public bodies are seeking to use the services of the individuals concerned through umbrella companies rather than the individual company owned by the tax payer concerned. The rules have not yet been fully implemented and we may have more to comment on this at a later date.

We would also like to stress that the Government’s proposal to introduce a new flat rate of 16.5% from April 2017 within the current VAT Flat Rate Scheme for businesses with limited costs such as many labour only businesses has been confirmed following the closure of the recent consultation process. Full guidelines have now been released in respect of the new rate.

As we have always maintained, with all matters referred to in the Chancellors announcements the “devil will be in the detail” and the full impact and understanding of all the announcements will not be made clear until the full parliamentary process has been undertaken and the proposals become law in the relevant finance act. We will issue further notices should any matters of significance be announced.